About Charlotte Hofman (1992, Netherlands) has a fascination
for the immaterial and mystical, and that which is just
as absent as present. She works with a variety of media. 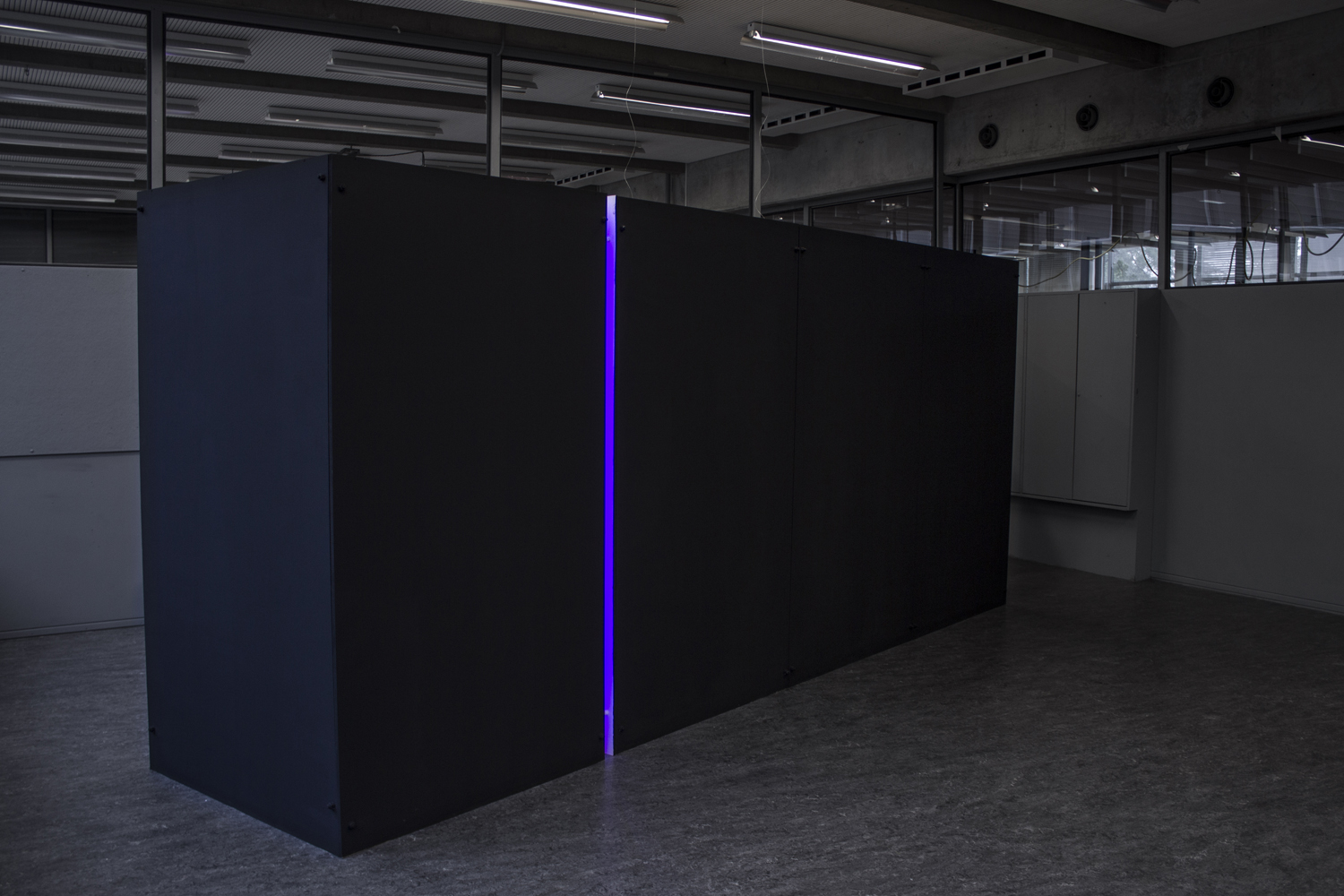 This installation was made as an experience; therefore it is very hard to express its physicality (in time and space) through words. This summary will be an attempt to at least explain its concept and outcome, even though this will supposedly be a rather abstract interpretation of it.

Based on an interest in the mysterious gap between a picture -or image- and that which is perceived through light, this project was led by a philosophical fascination around mediums such as film or photography (or in a more elementary manner; light). The project shows a frank mentality around the consequences of these; the paradox of what is seen and that which is not seen, with the more overall question regarding all this;
"what is image?"
A photo or image on itself is its own truth; the image on itself is what it is, it shows an image. In relation to the context it has been taken from, it is but a representation of a spatial context which is translated to a flat, still image.

From there I started thinking, "what are the consequences of image?; what is image?" Is it light that falls onto an object which reflects what you see, is it light what you see, or is it an object?

* Without an object light would not be tangible, the object touches and catches the light; it makes the light visible, for otherwise the light would pass through a space without ever touching upon an object or surface in order to be seen.

A photograph is a passed moment in time the moment it has been caught via film or a sensor. It is a nostalgic act.

My fascination though was about the moment before this recording of an image. This object actually exists in real time, 1 to 1. The light in the spatial context falls into a small dark box, (camera) because of the darkness of the box, an image can exist. The light is literally contained within its dark walls. If I would have an enormous box, the size of a building, with a lens, inside that box would be an enormous amount of light and image, up till the point where the box ends, here the image would end as well. This image making could continue forever.

This principle is actually the principle of camera obscura, a real-time translation of a spatial context. Where a photo - because the image is intercepted by a film or sensor - has become a passed moment, the camera obscura shows a 1 to 1, real time image of this context. 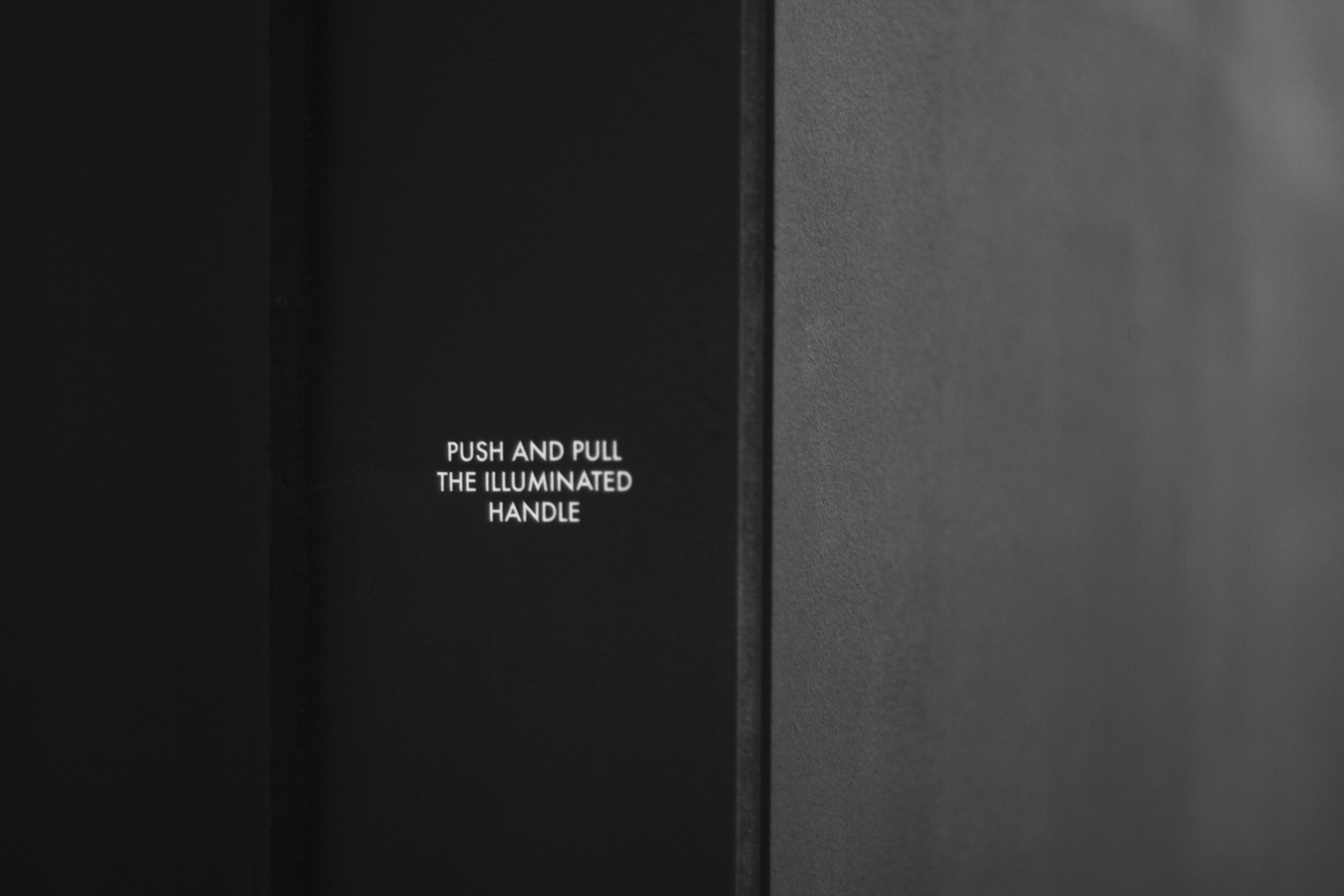 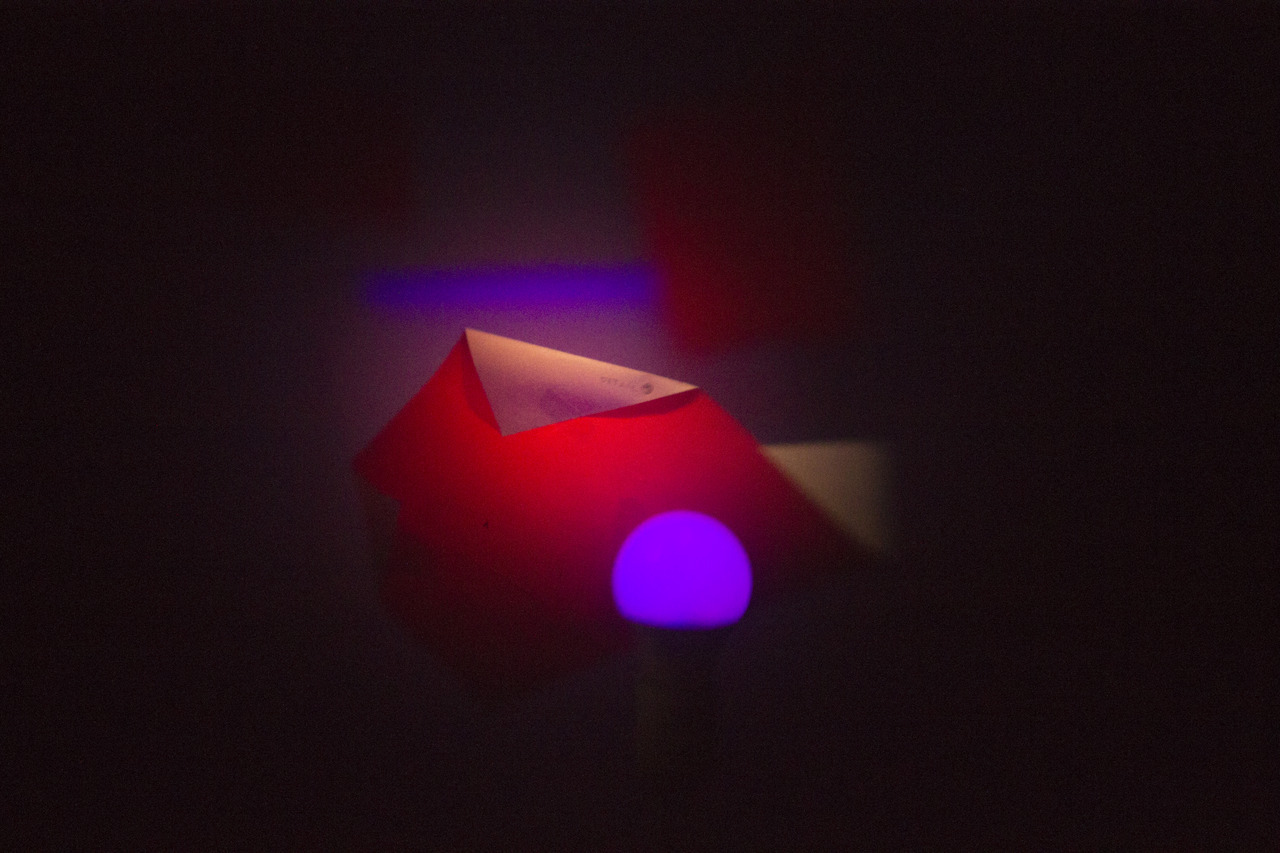 The installation existed of a dark and a light space. You could walk into the dark space and there was a screen which you could push forwards and backwards. In the light space there were placed objects (I will come back to this later). On the screen in the dark space there was a real-time projection of that what was seen in the light space (the objects). With this I also wanted to play with the expectation of the viewer, when people would walk around our graduation show they might think a film would play inside my installation, or another projection of a beamer, while actually what you saw, was happening at the exact same time. (A film would mean that the content was created beforehand and then showed through a projection afterwards)

Because of the translation of the 3D objects (in the light space) into a 2D representation (the projection onto the screen in the dark space) there was an interesting play of back-and-forth between 2D and 3D.

A feature of the camera obscura which I also played with was the focus. When you make an image through camera obscura, there is generated a lot of depth of field. Because of this, you can see an object in a space super crisp, and only a centimeter behind it it's already unsharp. 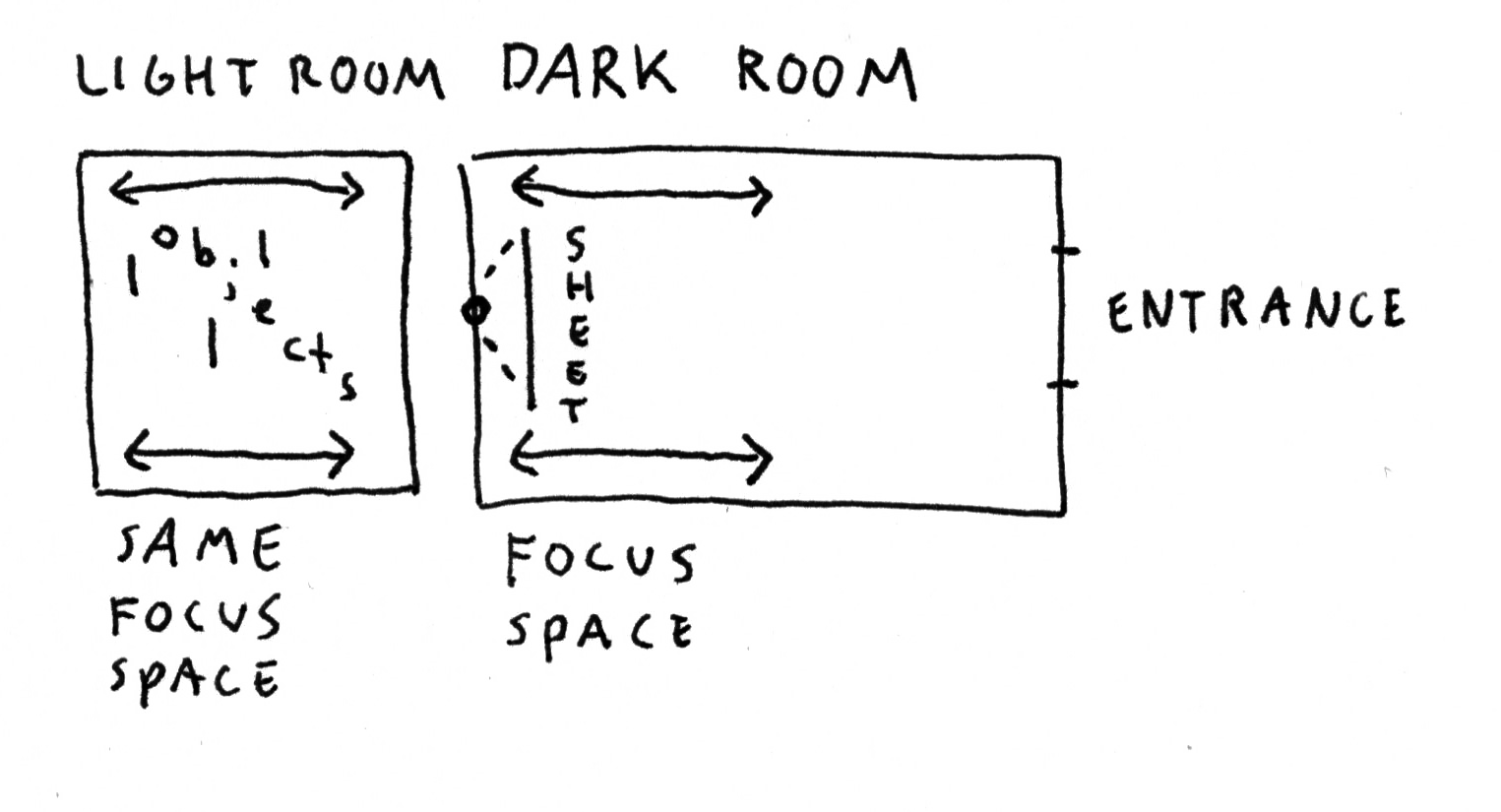 This means, that when an object was placed in the back of the light space, you would have to move with the screen towards the back of the dark space in order to discover it. Because of the focus you really had to make this journey before discovering the object. Because of this there is a really strange experience of spatial context via a screen that is moving itself in a spatial context as well.

The objects that I placed in the light space were white themselves or had a neon colour and were all flat. The objects were white because I was interested in the aura of an object - how the light falls onto an object and how the object is then defined in a spatial context, and how its presence creates an aura - the reflection of the light divides itself in space, against the walls, against the ground etcetera. This creates a subtle variety and overlap of different shadows, colours, textures and different definitions of each white object. White therefore has another definition of 'white' through all the different sorts of light that interact in the space.

The neon paper I used because this almost radiates light in itself. It also worked really interesting with the backside of the paper, which was white, where the white of the paper could reflect the light but did generate another image in combination with the neon. The paper which was folded I also used as a reference to the back and forth play between 2D and 3D. 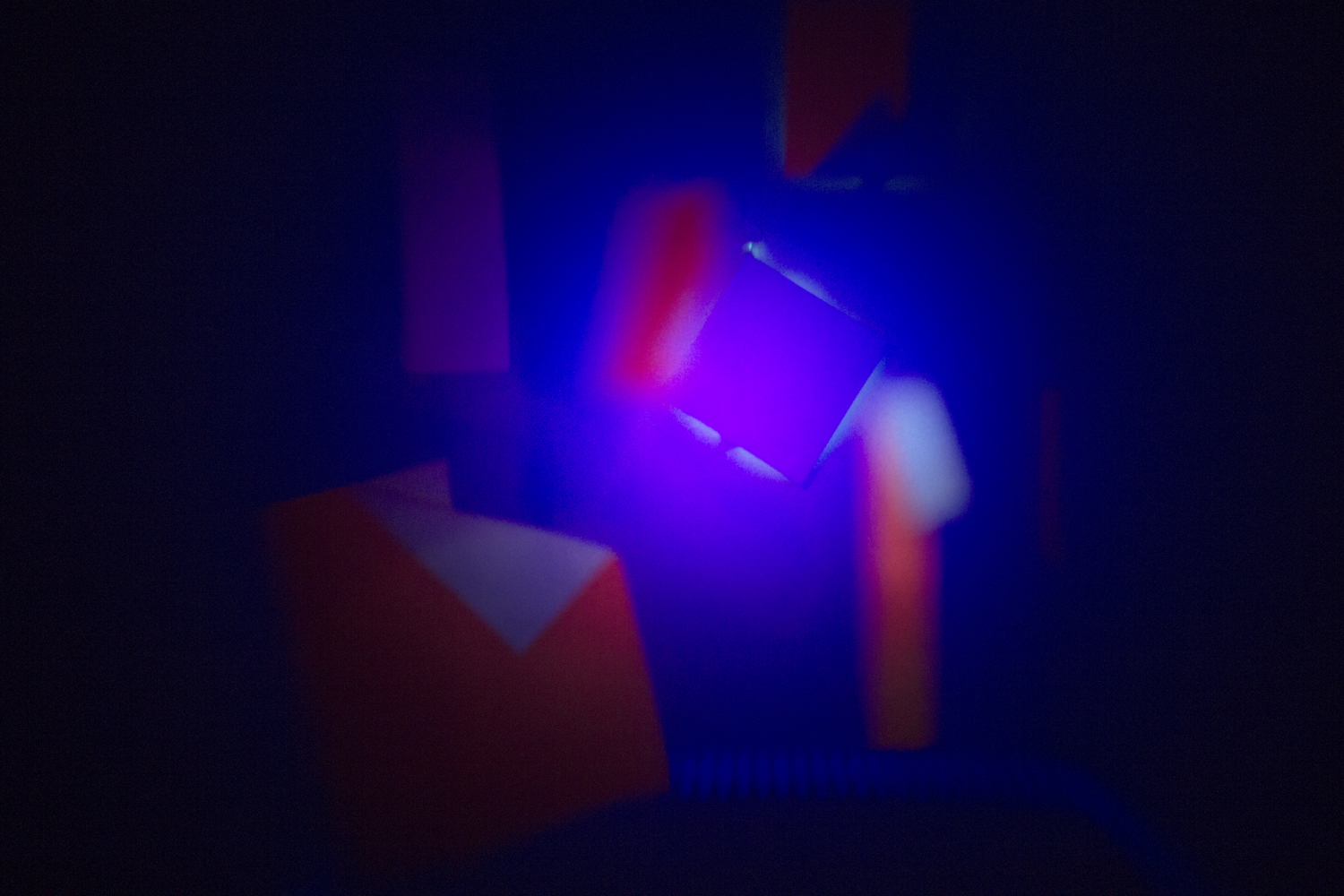 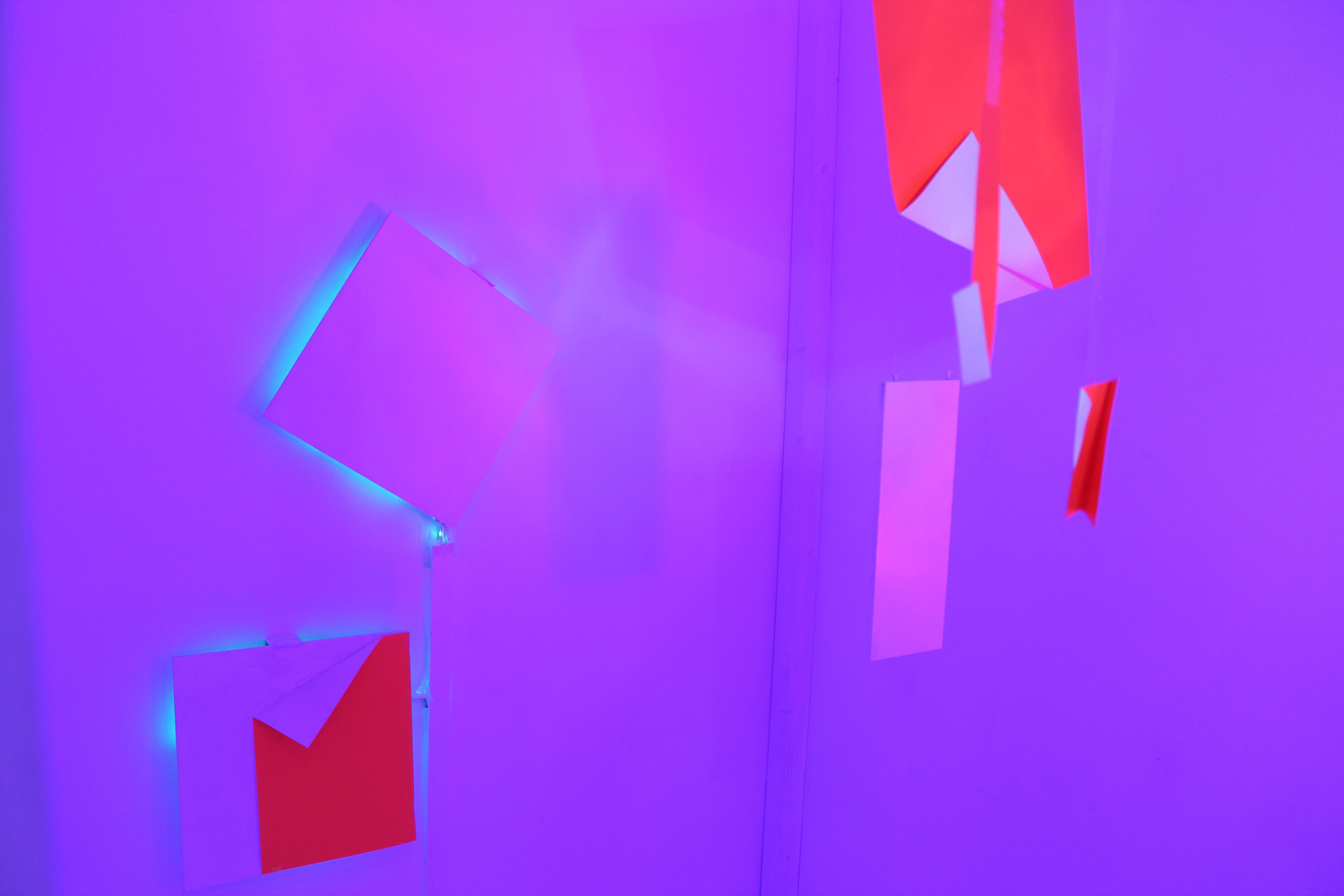 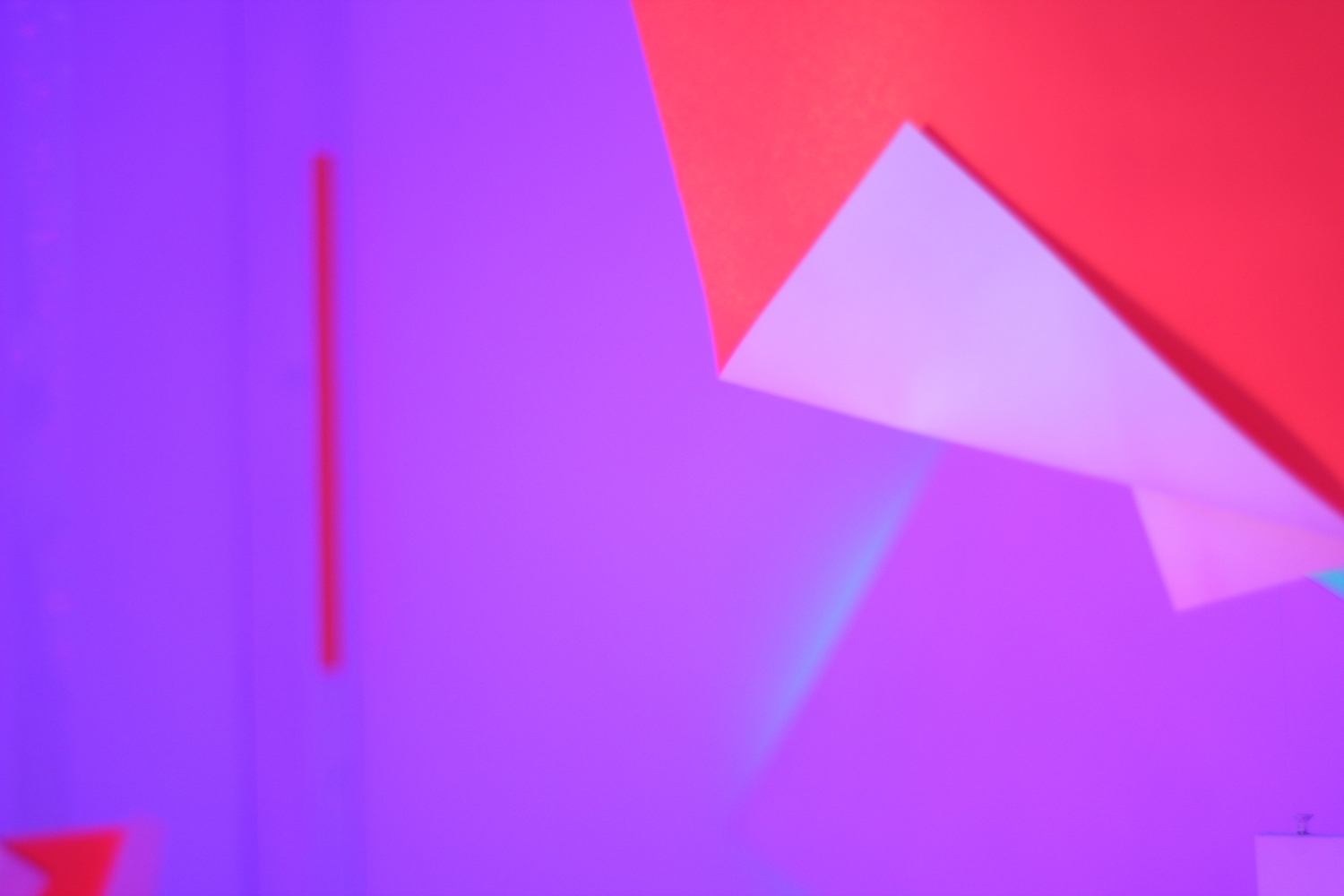 Another feature of the camera obscura is that the generated image is upside down. Because of all these objects, the image created was rather abstract, which made up or down unrecognizable and therefore more likely for it to make the viewer believe the image was generated as a projection or film, even though it was a real-time image. 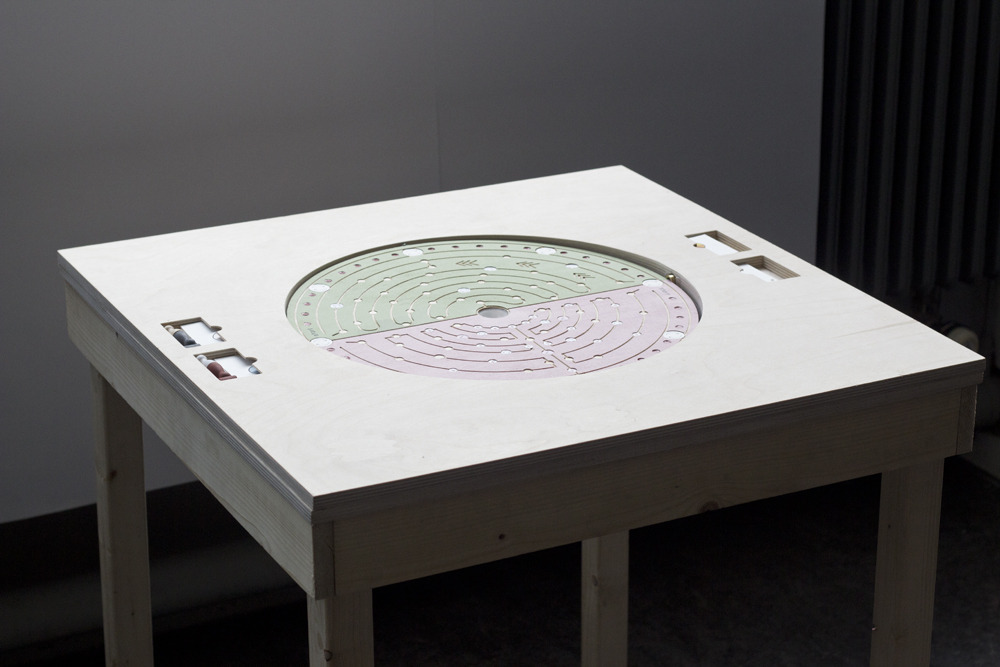 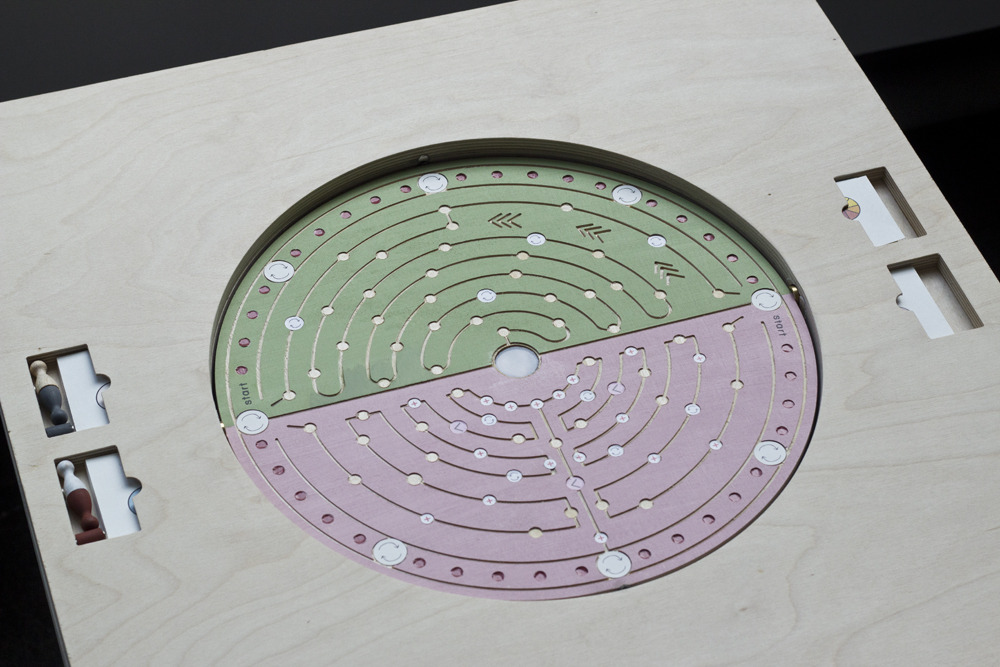 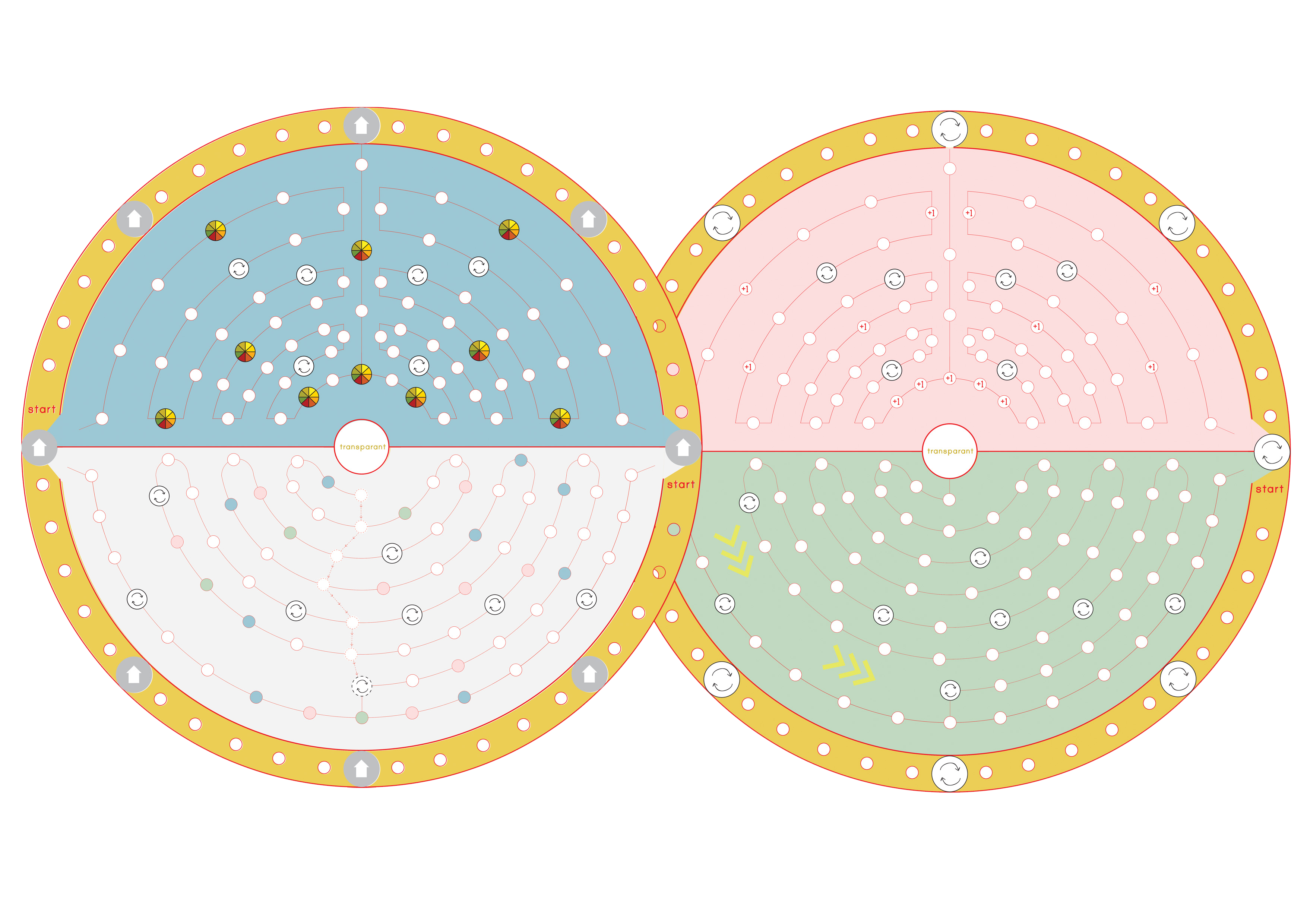 Game table with privacy as the overall theme.
The idea was to make use of the different sides that we all have in life, a private one and one for the outside. This I used in an abstract way and thought of a two-sided game board with a light and a dark side. You need both sides to get through the game but they are also each other's enemy.